The 5th Amendment is one of the most often quoted (by media, TV, or in movies). They are also the least understood rights in the US Constitution Bill of Rights. Maryland Lawyer Kurt Nachtman breaks down the 5th amendment of the Bill of Rights. Here it is in basic, understandable, and applicable terms.

No person shall be held to answer for a capital, or otherwise, infamous crime, unless on a presentment or indictment of a grand jury, except in cases arising in the land or naval forces, or in the militia, when in actual service in time of war or public danger; nor shall any person be subject for the same offense to be twice put in jeopardy of life or limb; nor shall be compelled in any criminal case to be a witness against himself, nor be deprived of life, liberty, or property, without due process of law; nor shall private property be taken for public use, without just compensation.

The 5th amendment is made up of four different clauses. Each is explained below. Lawyers spend lifetimes compiling research and cases for each clause. Looking at how they are applied in real life. But for the sake of brevity and sanity, here are short explanations of each.


Grand juries return indictments in many criminal cases. They are composed of a jury of peers. Operating in closed deliberation proceedings. They are given specific instructions about the law by the judge. Many constitutional restrictions do not apply during grand jury proceedings.

For example, the exclusionary rule does not apply to evidence presented to a grand jury. It states that evidence obtained in violation of the 4th, 5th, or 6th amendments cannot be introduced in court.

Also, defendants do not have the right to have their attorneys present in grand jury rooms during hearings. They would normally have such a right during questioning by the police while in custody.

The grand jury indictment clause of the 5th Amendment has not been incorporated under the 14th Amendment. So it has not been ruled applicable to the states. States are free to abolish grand juries, but Maryland still makes use of them.

Jeopardy “attaches” when the jury empaneled, the first witness is sworn, or a plea is accepted.

Self-Incrimination Clause (and Miranda) in the 5th Amendment Rights

The prohibition against compelled self-incrimination protects witnesses from being forced to incriminate themselves. To “plead the 5th” is to refuse to answer a question. This is because the response could provide self-incriminating evidence of an illegal act. Punishable by fines, penalties, or forfeiture. 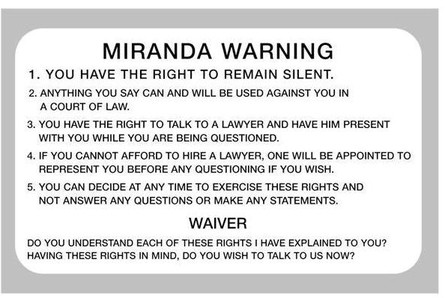 Miranda v. Arizona (1966) was a landmark case involving confessions. Ernesto Miranda had signed a statement confessing the crime. But the Supreme Court held that the confession was inadmissible. This was because the defendant had not been warned of his rights. The Court held:

“the prosecution may not use statements […] stemming from custodial interrogation of the defendant unless it demonstrates the use of procedural safeguards effective to secure the privilege against self-incrimination. Custodial interrogation is initiated by law enforcement after a person has been taken into custody or otherwise deprived of his freedom of movement.

Takings Clause in the 5th Amendment

The Supreme Court has held that the federal government and each state has the power of eminent domain. The power to take private property for “public use“.

The Takings Clause, the last clause of the 5th Amendment, limits the power of eminent domain. It does so by requiring that “just compensation” be paid if private property is taken for public use. Although if you read Kelo v. New London, you would believe that the government can take pretty much anything it wants. If it can justify the reasons rationally.

So What Does it All Mean?

In the event that you find yourself:

This is an extremely complex and often illogical area of the law (for example, police don’t need to advise you of Miranda Rights until you are “in custody” and you are being “interrogated“).

So our advice to you:

And be sure to keep our number handy so you can call your favorite Maryland lawyer.