Well, the Maryland General Assembly session is now over.  As a practicing Maryland lawyer who focuses on Maryland Criminal laws and Maryland DUI defense, it is vitally important to stay on top of the changes in the law, or else you run the risk of embarassing youself and doing harm to your client.

Not effecting Maryland criminal laws, but of note: 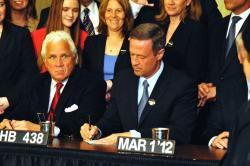 Can't we all just get along?

If you find yourself charged with a violation of Maryland Criminal laws or a Maryland DUI, be absolutely certain to hire a Maryland lawyer who keeps up with the changes in law, because the difference could literally mean jail time.